Bojo and the great dismissal

Posted on September 24, 2019 | Comments Off on Bojo and the great dismissal 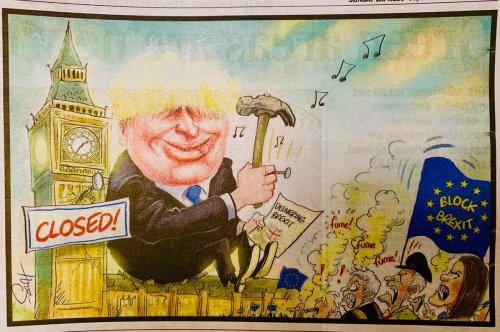 And it came to pass that Bojo didst get mightily pissed off with the Senate and did walk into the chamber and proclaim “In the name of God – go!”

And the Chair of the Chamber, Berk the Unconscionable, did protest most loudly. And the accolites of Magic Grandpa did call “Shame on you” as they were led away. And Bojo was pleased for the while.

And so Dame Jo the Swindler did gather her rather small herd together and did say “Expel the Bojo and make me your leader and I will pledge to remain in the evil empire. And should the people not approve then they shall be ignored for I know what is best for them.”

And Magic Grandpa did call his colaborators and said unto them “Make me your leader and I shall ask the people once more what they want and shall give them the choice to remain in the Empire or not leave, even though I agree with them not and may reconsider tomorrow.” But Grandpa was not popular with his flock and they didst openly dissent, which dischuffed him unto his knickers.

But then the League of Traitors did hit on a new plan. “We sball ask the judges to proclaim that Bojo has exceeded his powers and recall the Senators to the chamber” and they did succeed and call upon Bojo to resign.

This entry was posted in #Brexit, Westmonster Chronicles. Bookmark the permalink.